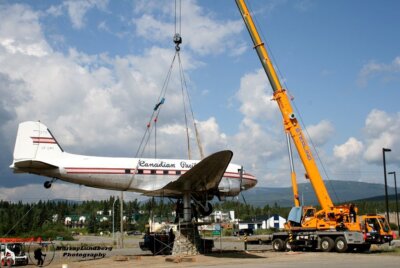 Douglas DC-3 CF-CPY gets installed in a new location, at the Yukon Transportation Museum at the Whitehorse airport, on July 16, 2009.
This photograph is © 2009-2013 by Murray Lundberg, and is not to be copied without express permission.

The Douglas DC-3 began its immensely long service career in 1936, outliving many pre-war aircraft such as the Ford Tri-Motor, the Avro Anson, the Lockheed Model 14 Super Electra, or the Lockheed Vega. Renamed the C-47 during World War II, the DC-3 has proved to be a reliable workhorse. After the war, the Douglas Aircraft Company sold thousands of these aircraft to dozens of operations. Canadian Pacific Airlines would purchase 15 of them for their diverse fleet. The DC-3 was a typical aircraft seen in the Yukon. Operated by both Canadian Pacific Airlines and Connolly-Dawson Airlines, later renamed to Great Northern Airlines.

The DC-3 holds a special place in locals’ minds in Whitehorse and anyone who has ever visited, despite potentially not even knowing the model of aircraft. The reason being? DC-3, CF-CPY is there to greet them upon their arrival. CF-CPY began its life like many of the DC-3s, as United States Airforce aircraft. CPY served as a cargo aircraft in both India and China during the Second World War. After the war, CPY was bought by Canadian Pacific Airlines (CPA) and served for 15 years as a part of CPA’s mainline fleet.

When it came time for CPA to update its fleet, CPY had already been relegated to flying the significantly less glamorous routes to Mayo and Dawson from Whitehorse. CPY was sold to Connolly-Dawson Airlines in 1960. CPY would continue to fly as a bush plane operating in remote areas like Old Crow or Eagle Plains area with wheels or skis. In 1966 CPY began serving the charted and scheduled flights under Great Northern Airlines. She would fly for another four years until GNA’s bankruptcy in 1970.

CPY was acquired by Northward Airlines and used for parts before being donated to the Yukon Flying Club in 1977. CF-CPY had a total of 31,851 hours of flying time, not unusually high for a DC-3. However, most of that total was spent either directly in the Yukon or in service to it. In 1981 CPY would be given a new lease and have her wheels leave the ground once again. CPY would be placed on a rotating pedestal, acting as a weathervane. The DC-3 still sits on her perch, now located in front of the Yukon Transportation Museum, a couple of hundred metres from its original pedestal placement. CF-CPY, to wax poetic, gently rotates at the slightest breeze, always facing into the wind as if trying to take off for one more flight.

More information on CF-CPY and Dawn Bartsch than could be presented here can be found in “Lady on a Pedestal” by Gordon Bartsch, available at the Yukon Transportation Museum Gift Shop. 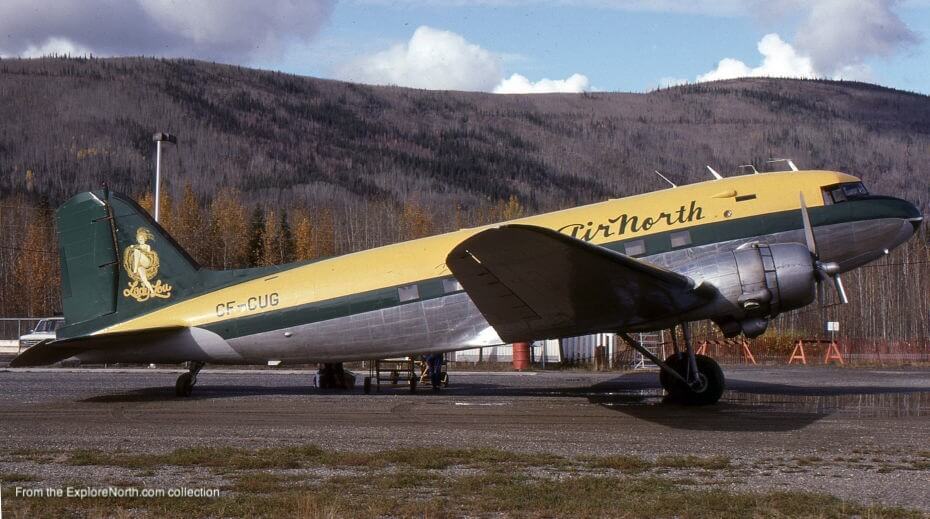 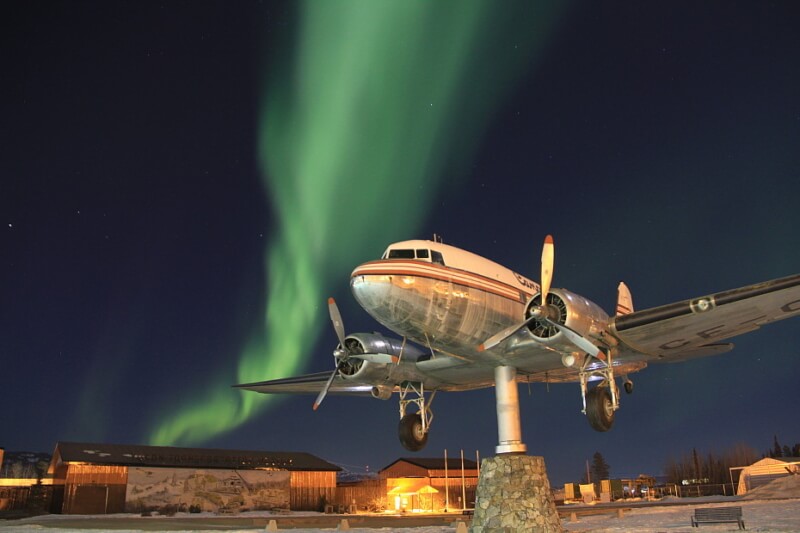 CF-CPY at her latest home in front of Yukon Transportation Museum with the Northern Lights dancing behind her. 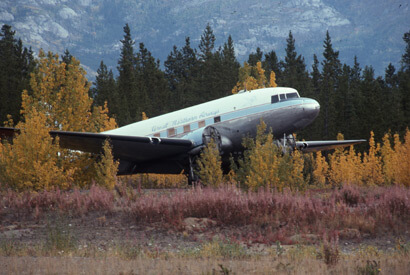 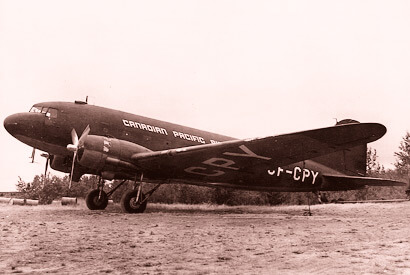