In 2020, the Yukon Transportation Museum celebrated 100 years of aviation history in the Yukon (a party that, thanks to COVID-19, has now extended into 2021.) The Canadian Pacific Airlines DC-3 outside the YTM is part of that storied history, and as part of our celebrations, we’ll be conducting a maintenance project on her. Our goal is to maintain the pedestal, repaint the exterior, repair her ailerons, and to install more benches underneath her. However, this project won’t be possible without the community’s support. If you’d like to donate to this endeavour, visit our Canada Helps page. All donations will receive a charitable receipt.

If you’d like to donate time and talent, email janna@goYTM.ca.

You can also donate at the museum and receive one of these awesome packages: 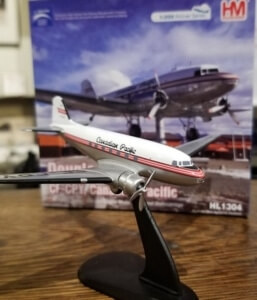 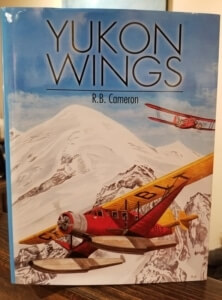 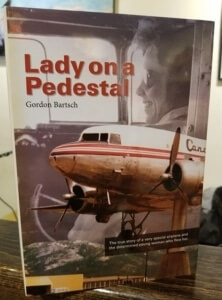 $100: Lady on a Pedestal by Gordon Bartsch, 2021 CPY Supporter certificate, and $65 charitable receipt.

Each donation from these packages goes directly to this project:

$25: Your choice of The Yukon or Yukon bumper sticker, 2021 CPY Supporter certificate, and a $15 charitable receipt.

The Yukon Flying Club was the precursor to the Yukon Transportation Museum. In 1977, these dedicated individuals with a passion for Yukon aviation embarked on a four-year volunteer project to create one of Whitehorse’s most recognizable landmarks.

The club devised a plan to restore a DC-3 aircraft, CF-CPY, to her original 1950s vintage Canadian Pacific Airlines colours. They also had to figure out how to safely mount her to a base. A local welder conceived the idea to have CPY pivot on her pedestal, working with the inevitable Whitehorse wind rather than against it. 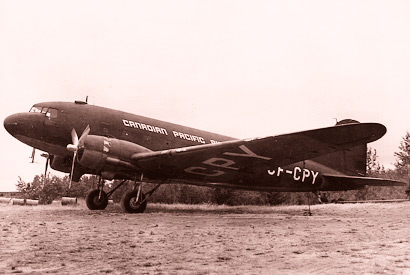 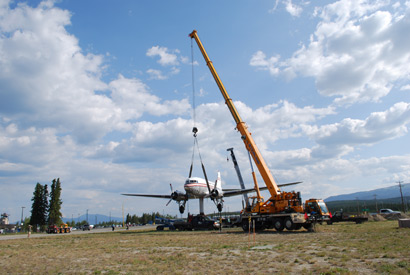 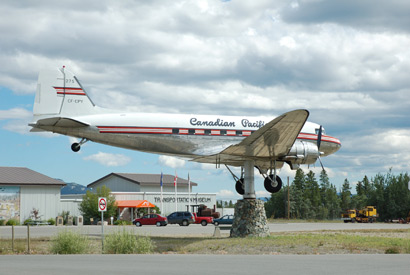 In 1981, CF-CPY was mounted on her pedestal in front of the Whitehorse Airport. Here she greeted locals, visitors and curious passers-by, her nose always pointing into the wind with the slightest of breezes.

As an outdoor monument, CPY faced the harsh extremes of Yukon weather on a daily basis. Her age started to show with faded colours and peeling paint. In 1998, CPY was removed from her pedestal for some restoration work. Once again, a dedicated volunteer labour force banded together to return her to her true glory. In September 2001, CPY was remounted onto her pedestal, showing off her new paint job and hand-polished exterior to the admiring public.

With expansions planned for the newly named Erik Nielsen Whitehorse International Airport, CF-CPY was again removed from her pedestal in July 2009. Gingerly placed on the ground and her pedestal dismantled and reassembled in front of the Yukon Transportation Museum, she was once more hoisted in the air to pivot in the wind.

If you did not catch the internationally acclaimed CPY Yarn Bomb project while it was on display in August 2012, see the pictures and videos at: