Dr. Ukjese van Kampen is a Northern Tutchone artist and aviator. He works in a number of different art styles and in the early 1980s he started developing this unique method of using the Northwest Coast First Nations Art motif in his paintings of aircraft, ships, and vehicles.

His aviation career began with the Royal Canadian Air Cadets in 1974, which met right here in the RCAF Recreation Centre, now the Yukon Transportation Museum, Ukjese went on to becoming an Airborne Commando in the Canadian Airborne Regiment and later a Combat Engineer in the United States Marine Corps. Ukjese was not flying airplanes and helicopters in the military: he was parachuting and rappelling from them, preparing loads for air drops and LAPES, directing and/or hooking loads up to hovering helicopters in the desert, wilderness and on ships. In training he has been part of joint ground-air attacks and the target of ground attack aircraft. 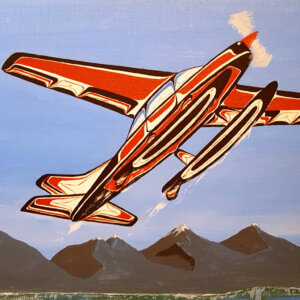 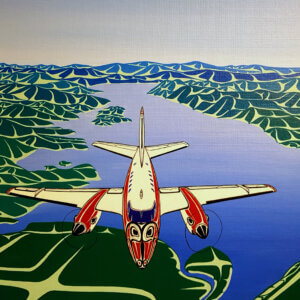 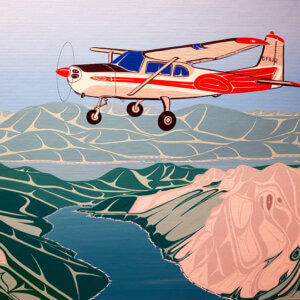 Ukjese is a bush pilot with an Airline Transport Pilot Licence and is a flight instructor. He has now almost 40 years of instructing and bush flying. He has flown for police highway patrols, medivac, animal surveys, forest fire patrols, search and rescue for aircraft and missing people, and… occasionally crashing and needing to rescue himself. He has held over 100 art shows worldwide, with over half being one or two person exhibitions and you can find his art in various museums, cultural centre and other official collections.