“The huge Ford 6-AT-S Special Trimotor, CF-BEP, originally served with the Royal Canadian Air Force as G-CYWZ from 1929 until 1937. During that time it pioneered many experimental operations, including bug spraying techniques, before it reverted to the commercial operations of McConachie´s United Air Transport. Here, it appears to be getting some maintenance work done at dockside, as the centre propeller is removed.”

In the early 1930s, the Ford Trimotor was a regular sight in the pioneering Yukon Aviation stables. Developed by the Ford Motor Company in 1925, multiple Ford Trimotors would operate as both Yukon based airplanes, as well as planes stationed else where, but serving the various Yukon routes.

Two Yukon companies, B.Y.N. Co & Northern Airways operated the Trimotor over about 10 years of service. These two competitors had to not only fight off each other in the early days of air travel and service, but other companies outside the territory. Companies like White Pass Airways, and Canada North Airways. The Trimotor was an impressive plane for its time with a large capacity for both passengers and cargo. The Trimotor had great characteristics for snow landings particularly when fitted with skis, and they proved to be reliable winter powertrains; a fact that is of great importance in Yukon.

The Trimotor would be a main character in The Rate War that was Yukon´s early aviation. Competition was fierce in these early days, not just amongst the home-grown heroes of B.Y.N. Co and Northern Airways, but with interfering interlopers, particularly from Alaska. From 1936 until 1939 rates from Whitehorse to Dawson plummeted from $75 to $30. B.Y.N. Co and Northern Airlines would actually fly miners into Dawson on credit! Telling the miners to pay them once they were back on payroll.

The Ford Trimotor would serve the Yukon in the early days of air travel here in the territory, but its dated design meant that it was never meant to last. A series of mishaps would cripple a trio of Trimotors here in Yukon in the late 1930s. The most renowned of this trio was CF-BEP a former RCAF airplane, and the aircraft who inaugurated the flight from Edmonton to Dawson in 1937. CF-BEP would be unceremoniously taken out of commission in 1939 due to an accident on the Vancouver Airport runway. A Hawker Hurricane veered off and collided with CF-BEP, the Hurricane was incinerated, and CF-BEP was deemed a write off. BEP´s wreckage was purchased by B.Y.N. as salvage. A part of CF-BEP still survives at the Yukon Transportation Museum in the form of a “blow pot”, a device used to warm up the engines on cold winter days.

The Yukon Transportation Museum does not own these images and is only using them to illustrate the history of these remarkable aircraft.

“The BYN Company´s Ford 4-AT-3 Trimotor, formally NC3041 of Tacoma, Washington, was purchased for $3100 in April of 1936, imported at Vancouver, and flown o Whitehorse by Vern Bookwalter.”

“The Northern Airways For Trimotor out on winter operations.”

“The BYN Ford Trimotor taxiing on the snow-covered airfield at Dawson City.”

“The fine service of the venerable Ford CF-AZB came to an abrupt end here on August 8, 1940, when it was being towed out by the Ford-son tractor. A wingtip hooked on a partially closed door, swinging the tail sideways into the wall of the T-shaped hanger. The impact caused the tired old fuselage to buckle behind the wings, in the area of the lavatory, where considerable corrosion had set in. The “hanger rash” spelled the end of AZB´s illustrious, pioneering career.” 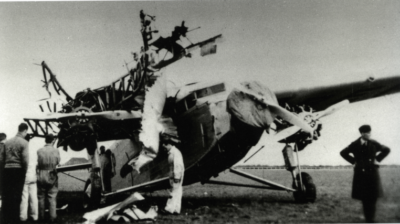