A Fabulous Mode of Transportation

A Fabulous Mode of Transportation (of the future?)

Today, we’re taking a short dive into one of the more outrageous methods of transportation in history. It hasn’t been implemented widely yet, but one could argue that it was first made possible by Otto von Guernicke, who invented the first air-pump and examined the properties of vacuums. 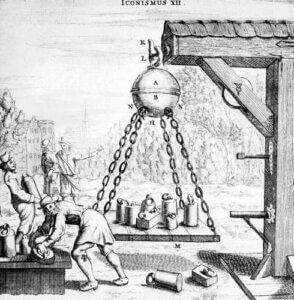 What I’m referring to is a pneumatic transport tube, which can transport items (and people) rapidly through tubes, unimpeded by air friction and rocketed forward by vacuum. In modern concepts these might use tech like maglev (such as the Shanghai Transrapid). One of the current companies that has grabbed on to this hype is Virgin Hyperloop One. 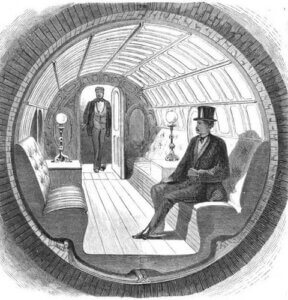 While the implementation of these technologies in the future remains uncertain, the past does have some fantastic examples of this technology in use! In New York City, the first underground transport was “propelled by little more than a gust of wind and gravity.” In 1870 a one-block transport system was unveiled by Alfred Ely Beach, who had previously advocated for the construction of underground tunnels for horse-drawn carriages. The Beach Pneumatic Transit could move people down Broadway from Murray Street to Warren Street at a speed of 16 km/h. 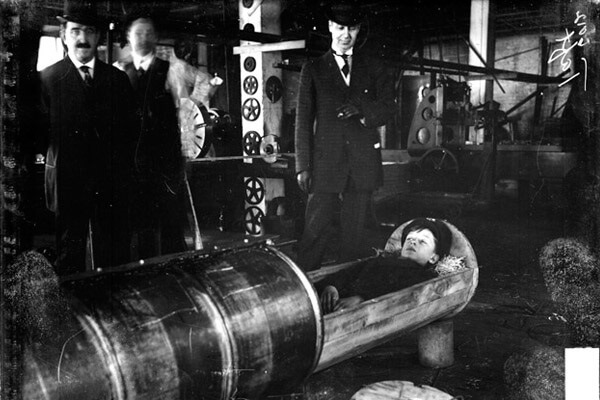 This system did not last long and the tunnel was closed in 1873, but pneumatic tubes would see use later, largely in mail systems. For example, a pneumatic postal system was widely used in New York from 1897 until 1953. Pneumatic tube systems were originally praised for making mail transportation much quicker and more efficient. There was still some desire to see tubes designed for human transport, as seen in Joseph Stoetzel’s proposal in 1908 in Chicago that included a demonstration of safety using his son. Despite the renewed interest in the system, it was not to be (yet).

As automobiles became more available and the world developed to accommodate them, pneumatic tube systems became less practical and efficient. We’re not at the state yet where people, large freight, or cars zoom through tubes that connect cities and countries, and it’s possible we might skip that phase as other transportation methods connect our world. Whether or not we’ll see these transport systems widely used in the future is still up for debate! 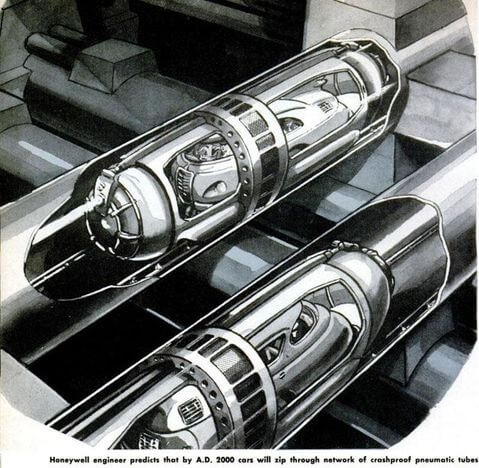 Sources and further links are included as hyperlinks.