A Vision for the 100th Anniversary of the Alaska Highway

The people, events, and ideas of the Alaska Highway era profoundly changed the Yukon.  In the 80 years since, we have often struggled to understand the relationship between the Yukon as a homeland and the Yukon as a frontier.

Between now and 2042, the Yukon will prepare to address this challenge as we plan for the 100th anniversary of the arrival of The Road.  This moment is a once in a generation opportunity to renew public engagement with history.  It is a chance for Yukoners to learn about and reflect upon the full sweep of our territory’s past, celebrating examples of connection, resilience and life ways, while reckoning with injustice, racism and extractive thinking.

The occasion calls on us to use knowledge of the Yukon’s past – from time immemorial and continuing to the present – to build a stronger future.

When we commemorate the Alaska Highway’s 100th anniversary, we must ensure Yukoners of all ages and backgrounds see themselves in history, appreciate its relevance, and understand how diverse people of the past all contributed to the Yukon as it is today, and will be tomorrow.

This anniversary can help to show audiences not just that history matters, but that their history matters.  Through the stories we share, this anniversary can encourage pride of place and resilience while also fostering critical awareness of our faults, past and present.  This commemoration is a chance to deepen people’s appreciation for history, broaden their perspectives, and remind them of the Yukon’s unique contributions to the world.

The 100th anniversary of the Alaska Highway will be whatever we decide it should be, and so over the next 20 years, we – scholars and educators, historians and museum professionals, and communities and citizens – must think carefully and critically about how we commemorate the Alaska Highway.  We should approach this anniversary with a spirit of empathy and humility; with a love for the Yukon and a desire to rekindle friendships; with respect for historical expertise and the perspectives of our fellow community members; with a forthright recognition of our obligations to our fellow Yukoners; and with a shared commitment to the common cause of an inclusive community, strengthened by reconciliation.

Let’s approach our history with a spirit of empathy and humility; with a love for the Yukon and a desire to rekindle friendships; with respect for historical expertise and the perspectives of our fellow community members; with a forthright recognition of our obligations to our fellow Yukoners; and with a shared commitment to the common cause of an inclusive community, strengthened by reconciliation.

Inspired by ‘A Vision for the Semiquincentennial’ by John R. Dichtl, President & CEO, AASLH

How can we make sense of the Alaska Highway in its 80th year? 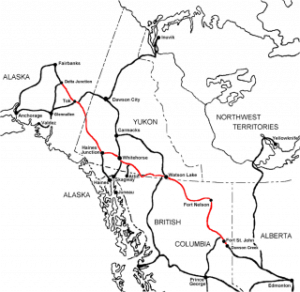 “It was the greatest infrastructure project Canada’s North has ever seen, built in record time. The Alaska Highway, starting at Dawson Creek, B.C. and ending in Fairbanks, was planned and paid for by a foreign government to aid in a war that had engulfed the entire world but hadn’t touched the wilderness north of 60.

While the highway has put the Yukon far ahead of its neighbours in accessibility and industrial opportunity today, such towering achievements always cast shadows. The inhabitants of the land saw their world disappear without warning in moments, and the new one bore a heavy cost.”

Excerpted from Paths of Glory, by Tim Edwards.

The Alaska Highway Corridor crosses provincial, territorial, international and cultural boundaries as it winds through northern British Columbia, southern Yukon and into Alaska. Its geography, geology, flora and fauna encompass arable lands at its south end and sub-Arctic conditions in the north. The human footprint in the Corridor is most clearly evident in the highway itself, in its towns and in protected places, such as Kluane National Park and Reserve. A closer look reveals that the Corridor has many stories to tell through less obvious human imprints on the landscape, such as places of importance to First Nations, former trading posts along the waterways, old trails and migratory routes, and relics from the Second World War era.

The Corridor’s centrepiece is the Alaska Highway. Over a distance of almost 2,237 km, it serves residents, tourists, foresters, miners, oil and gas companies and adventure seekers of all stripes. The highway winds its way up five summits, ranging from 975 to 1,280 metres, and crosses many waterways, including the Teslin, Peace, Liard and Yukon rivers. The road is divided into three distinct sections: in British Columbia, it is known as Highway 97; in the Yukon as Highway 1; and in Alaska as Highway 2. It runs through diverse natural eco-regions, from the Peace River Plains through boreal forests and mountain ranges further north.

In May 2022, the Canadian Society for Civil Engineering (CSCE) held its annual conference in Whistler, British Columbia. As part of the conference’s theme of ‘Engineering, Community, Connections’, the CSCE National History Committee took a closer look at some fascinating technical aspects of the construction and history of this highway.

Some of those presentations can be found below, including the keynote address from Dr. Ken Coates, the Canada Research Chair in Regional Innovation at the Johnson-Shoyama Graduate School of Public Policy, University of Saskatchewan.

The Black Experience on the Alaska Highway

The Alcan Pioneer Road and Discovery of Permafrost

The Alaska Highway – A Yukon Perspective

“Roadhouse Communities” and “A Puzzling Legacy” (2022) 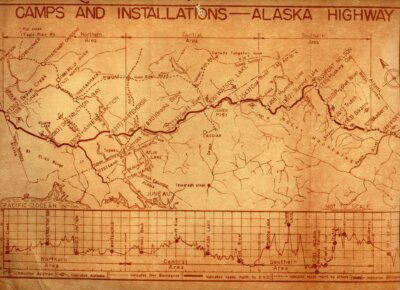