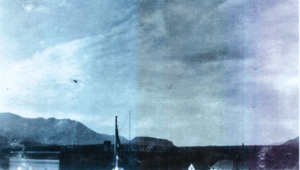 One of the American DH-4 biplanes flies over the Caribou Hotel in Carcross Yukon, marking the inauguration of aviation in the Yukon Territory. August 16th, 1920. Photo supplied by: Anne Morgan.

Previously only inhabited by birds and insects, the skies over the Yukon Territory were intruded upon by the marvels of mankind. The domain of mosquitos and ravens gave way to human engineering on August 16th, 1920, when the drone of engine and propeller noise could be heard echoing through the rugged Yukon landscape. The dawn of machine flight had reached the northern territory, less than 20 years since the advent of the aeroplane.

The mechanical wonders that barrelled into the Yukon Territory on the morning of August 16th were three De Havilland DH-4 bi-planes. The DH-4 had been a day time bomber and reconnaissance aircraft during the First World War. Flown with success during the war by both the British and United States Airforces respectively, the large bomber would be tasked with an equally dangerous and daunting task after the war. Four De Havilland DH-4s from the Black Wolf Squadron would be tasked with a feasibility study; is long distance air travel possible?

Leaving July 15th, 1920 from New York, the Black Wolf Squadron would begin its immense journey North-West to its final destination, Nome Alaska. The journey would take over a month due to inclement weather and repairs. For the people of the North, this was the first time that many of them had ever seen such a spectacle. Around noon on August the 16th, three of the four bi-planes lumbered into Whitehorse to a near whole town reception. To accommodate the aircrafts´ arrival a strip of land was cleared in the area that would eventually become the Erik Neilsen International Airport today. The visiting aircraft were not to stay long in Whitehorse, with two of the three aircraft departing for Dawson City at 3 pm that same day. A blown tire on one of the DH-4s would delay the take off of the other two. However, an ingenious local by the name of Bert Peterson rectified the situation by constructing a tire out of rope! Yukon innovation and self sufficiency manifested itself in aviation on day one that aviation was brought to the territory.

The DH-4s that graced the territory were just passerbys, on route to their final destination of Nome Alaska. It would be another 7 years before a home grown aviation industry would begin in the Yukon, with the Yukon Airways and their Queen of the Yukon. Despite being interlopers, these American aircraft showed the future and usefulness of air travel in the North.
–
–
–
–
Yukon Transportation Museum does not own these images and is only using them to illustrate the history of these aircraft. 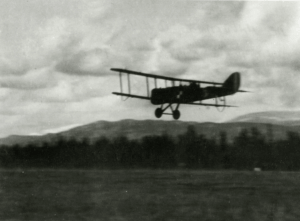 “The U.S. Army flyers receive an enthusiastic welcome from the townsfolk of Whitehorse. Two of the DH-4´s are seen here parked on the partially cleared plateau west of town — the present site of the Erik Nielsen International Airport.” R.B. Cameron “Yukon Wings”, page 4 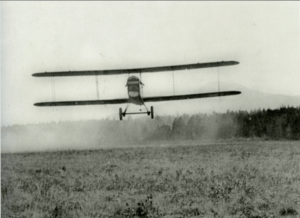