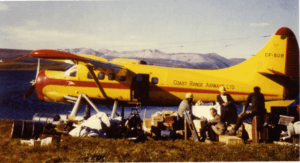 “Herman Peterson´s Otter, serial no.8, moving a Conwest geological exploration camp from northern British Columbia in the central Yukon. The acquisition of the Otter was coincident with a company name change from Peterson´s Air Service to Coast Range Airways.”
R.B. Cameron page 290.

The company De Havilland is ubiquitous in bush flying, here in the Yukon as well as across Canada. Their DHC-2 Beaver is synonymous with bush flying here in the Yukon, but the Beaver has a bigger brother who has been adapted into the modern age: the DHC-3 Otter. De Havilland of Canada saw the success of the Beaver as a STOL ( Short Take Off and Landing) aircraft, but saw the need for a bigger version. Thus the Otter was born. Essentially a Beaver scaled up, the Otter was developed in 1951, with its certification coming in 1952. A large single engined high wing aircraft, the Otter would act as the bigger compliment to its predecessor. 466 Otters would be produced, with 184 Otters being bought by the United States Army. Other militaries would adopt the Otter, including Canada, but the Otter like its smaller sibling would find its greatest success as a commercial bush-plane.

Multiple Yukon Companies have operated and continue to operate the DHC-3 Otter. Based out of Atlin B.C. Peterson Airways re-named to Coast Range Airways Ltd, operated an Otter and despite Atlin residing in Northern B.C. it gets a pass from this author as an honorary Yukon company. Trans North Turbo air, re-named to Trans North Helicopters, would purchase a whole fleet of fixed wing aircraft including an Otter with the serial number 8. The Otter that Trans North would own was originally the Coast Range Otter CF-SUB.

The Otter has the correct formula for a successful bush-plane, STOL capabilities, able to be fitted with wheels, floats, and skis, and capable of carrying an impressive load. The Otter also has another advantage over aircraft used in a similar role: its ability to adapt into the modern age. The Otter unlike some of its counter parts, has been upgraded to facilitate turbo prop engines over its original radial piston engine configuration. The addition of the turbo prob modification gives the Otter the benefit of added reliability. The original piston radial, was temperamental, where the turbine fitted Otters require simple preventative maintenance. Otters fitted with turbo prop conversions are known as DHC-3Ts, the T standing for turbo-prop. Otters with the Alkan Air operates a turbo Otter in their Yukon Fleet.

Beavers, Otters, and Twin Otters have proved themselves time and again here in the Yukon showing that if it isn´t broke, don´t fix it. This post was originally supposed to just highlight the Otter, but it is impossible to talk about the Otter without recognizing that the Otter was an outgrowth from the Beaver, and impossible again not to talk about the outgrowth of the outgrowth the Turbo Otter, and Twin Otter alike.
–
–
–
–
The Yukon Transportation Museum does not own these images and is only using them to illustrate these historic aircraft.

Date and location unknown for the for first picture.
Date unknown for second picture.
https://www.flyairnorth.com/sites/default/files/2019-12/4NDocs_Air%20North%20History.pdf 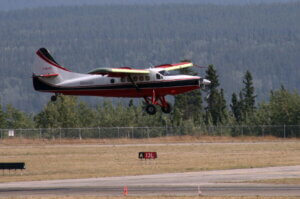 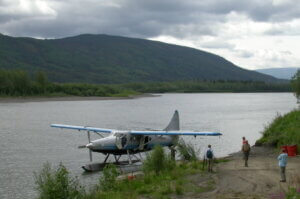 C-GMCW, a 1956 De Havilland DHC-3 Turbo Otter operated by Black Sheep Aviation & Cattle Company, loading along the Stewart River on July 14, 2003.
This photograph is © 2003-2014 by Murray Lundberg, and is not to be copied without express permission. 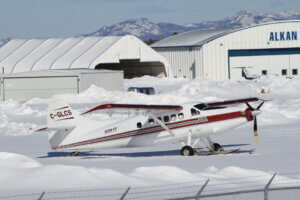 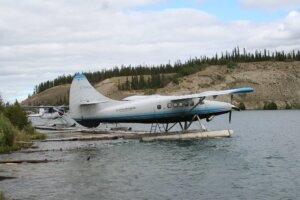