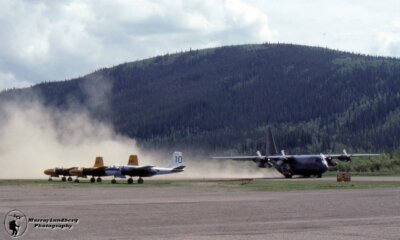 A Royal Canadian Air Force C-130 Hercules takes off at Dawson (YDA) in June 1996. To the left are 3 of the Douglas A-26 Invaders used as water bombers by Air Spray Aviation of Edmonton. – – This photograph is © 1996-2014 by Murray Lundberg, and is not to be copied without express permission.

World War 2 touched seemingly every place in the world in some way or an other, including the Yukon. The Douglas A-26/B-26, was originally designed to replace the A-20 “Havoc”. A-20 “Havoc”s were flown through Yukon on route to Russia, in part of the “Lend Lease” operation the USA was conducting with the Soviet Union. The A-26 would have to wait a little longer than its predecessor the A-20 to fly in Yukon airspace.

The “Invader” as it was known is an interesting aircraft in regard to Yukon Aviation. The A-26 has never lived in the Yukon permanently, but served it dutifully for nearly 30 years. What would a former combat aircraft have to provide the Yukon? Coincidentally the same powerful engines and bomb bay were put to excellent use in the wildfire suppression role. Operated under Air Spray of Edmonton Alberta, the A-26 would be the company´s primary wildfire suppression tool. �

Air Spray would own and operate a total of 22 A-26 “Invaders”, using them as fast hard hitting air-tankers from 1970 until their eventual retirement in the early 2000s. Although capable of hauling 900 US gallons or 3,100 litres of fire retardant, government contracts required faster aircraft with larger capacity. The venerable workhorse had served its duty.

The A-26 with Air Spray served the Yukon Territory, the N.W.T., Alberta, British Columbia, and Saskatchewan for nearly 30 years. This is in addition to a plane that was nearly 30 years old by the time Air Spray began using them in 1970. It is safe to say that an aircraft designed to do damage to anything on the ground, ironically helped to stop the destruction caused by wildfires. Air Spray continues to operate in Yukon, using the larger L188 four engined turbo-prop Electra.
–
–
–
–
Yukon Transportation Museum does not own these photos, and is only using them to illustrate the history of these magnificent aircraft. 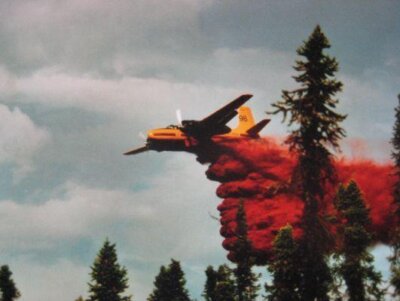 An A-26 flown by AIR SPRAY of Edmonton Alberta, drops its fire retardant on a wildfire. Date unknown. Location unknown. 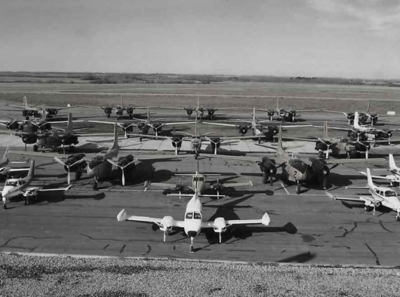 A sample of the 22 A-26s that AIR SPRAY operated in their fleet. Date unknown. Location unknown.