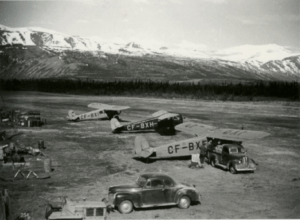 The Fairchild 71, like its similarly shaped competitor, the Fokker Super Universal, and its bigger brother the Fairchild 82, was a Northern workhorse. The Fairchild 71 was originally built in the United States from 1928-1930. A second Canadian factory was built in Montreal Quebec in 1929, to supply the Canadian bush flying industry. The 71s would serve the early years of Canadian bush flying, and five of them would serve in the Yukon Territory. The 71 met all the required bush-plane requirements of the day including being able to be fitted with wheels, skis, or floats.

During the Second World War, all facets of society were focused on the war effort. This necessity for war goods and services would bring a thriving business for Yukon bush pilots and their respective companies. George Simmons owner Northern Airways would purchase four aged Fairchilds to support the boom. Two of the Fairchilds were model 71s and the other two were the slightly earlier 2W2 models. These Aircraft would go on to serve the Alaska Highway project and the Canol projects. The American Public Roads Administration had told George Simmons that they could keep as many airplanes busy as he could put into service. It was for this reason that the aged Fairchilds were purchased. The four Fairchilds were imported from the United States with much shorter than normal importation process, as these aircraft were deemed important to the war effort.

By the time the four Fairchilds had even made it to the Yukon, they were already antiques, yet they were the best machines available. Finding new aircraft for the job was near impossible, as companies shifted focus to the war effort. Northern Airways´ pilots would practically live in their aircraft; the four Fairchilds and a Waco, throughout the war. Northern Airways managed to keep accidents and incidences minimal despite the countless hours they operated the flying antiques during the war. One minor incident occurred over Quiet Lake when one of the 71s CF-BXH s would break through the ice. The pilot and crewman survived the incident; cold but alive. CF-BXH would be salvaged with its steal tube frame being drilled so that water could escape and with fabric patches covering the holes caused by the ice.

Fairchild 71s would not just serve under Yukon companies but would operate here in the Yukon under other companies such as Canadian Pacific Airlines. Two Fairchild 71s that served CPA in the Yukon still exist today as the pride of their respective museums. CF-ATZ resides in the Alberta Aviation Museum in Edmonton, and CF-AKT resides in the Royal Aviation Museum of Western Canada in Winnipeg Manitoba. Both CF-ATZ and CF-AKT had impressive histories operating with Canadian Airways Ltd out of Winnipeg, before coming to the Yukon in 1942-1943 under CPA.

One of the Northern Airways Fairchilds brought up during the war, CF-BXF, was upgraded to a model 71C in 1949 from an earlier 2W2 model. CF-BXF would be the longest serving Fairchild 71s in Canada; flying under Alert Bay Air Services and Sechelt Air Services until it was wrecked in 1963. Fairchild CF-BXF is currently being restored at the Yukon Transportation Museum.
–
–
–
The Yukon Transportation Museum does not own these images and is only using them to illustrate the history of these aircraft.
–
–
Photo 1: “Yukon Wings” R.B. Cameron pg. 254 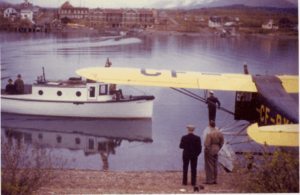 “The M/V Norgold pulls up to the NAL Fairchild, heeled in on First Island in front of Atlin, to exchange incoming and outgoing passengers, mail, and freight. On the beach in front of town, an E-2 Eastman Flying Boat can be seen, pulled up on shore” – R.B. Cameron “Yukon Wings”, pg.258 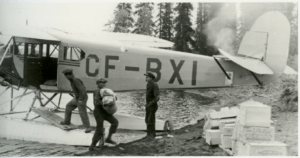