The Northern Airways Fokker Super Universal CF-AAM, unloading on the Lowell Glacier in the St.Elias icefields for the Brad Washburn-National Geographic Expedition in March of 1935.
“Yukon Wings” , pg. 334

The early years of aviation in the Yukon were a tremendously competitive time. With companies employing a war over wages. Known as “The Rate War,” companies would undercut their own business so that their competitors had no choice but to also lose money. In these competitive times a competitive aircraft was needed. Enter the Fokker Super Universal.

The Fokker Super Universal was the weapon of choice for Northern Airways during the 1930s “Rate War”. The Super Universal was well handling, with a large payload, and was tough enough to survive the primitive and scratched out runways in the North. However, like many of these pre-war pioneers, their reign was relatively short lived in comparison to the likes of the Beaver and other post-war aircraft.

On December 5, 1937, the Northern Airways Fokker Super Universal CF-AAM was involved in an accident during take off leaving Dawson. The pilot, Leslie Cook, 6 passengers, and the Super Universal suffered minor damage. Surprisingly, the aircraft was deemed a write-off, despite having been overhauled just 3 months previous in Vancouver. The Fokker Super Universals role in the “rate war” was over.

CF-AAM´s story would not die out at the end of the Dawson runway, however. Although the aircraft was stripped and left to rot at the end of the runway for 40 years, it would not be the aircrafts final resting place. The Super Universal CF-AAM would rise like a phoenix, being restored over the course of 18 years by a team of volunteers. CF-AAM was rebuilt with the wreckage of two other Super Universals that were crashed in the Yukon. Parts from an American Super Universal was also used. After 18 years of hard work and 10,000 hours of labour from volunteers, CF-AAM was complete and airworthy. On July 24, 1998, after 61 years, the proud yellow and green Fokker Super Universal rose into the air again.

CF-AAM would then spend the next six years touring across Canada, winning many awards at airshows along the way. It would eventually come back home to the Yukon, stopping in its former base at Carcross, and perhaps most importantly, redeeming itself by taking off incident free out of Dawson; the place that had been its resting stop for some 40 years. CF-AAM now resides in the Royal Aviation Museum of Western Canada in Winnipeg Manitoba.
–
–
–

Yukon Transportation Museum does not own these images and is only using them to illustrate the history of these aircraft.
–
–
Photo 1: R.B. Cameron “Yukon Wings”, page 334 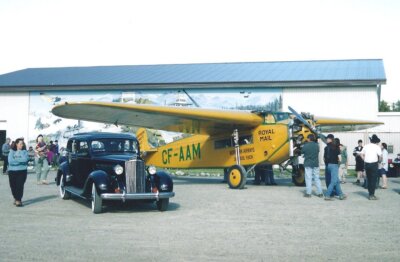 CF-AAM out front of the Yukon Transportation Museum, during its trip through the Yukon in 2001.
This photograph is © 2001-2019 by Murray Lundberg, and is not to be copied without express permission. 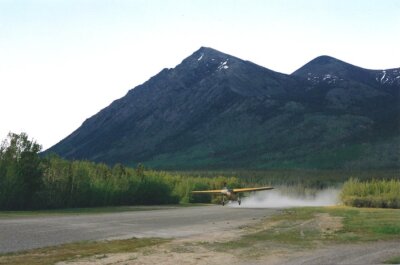 CF-AAM takes off from a runway in Yukon. Date 2001, location unknown.
This photograph is © 2001-2019 by Murray Lundberg, and is not to be copied without express permission. 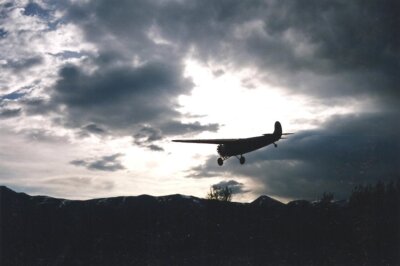 A silhouetted CF-AAM in Yukon, date 2001.
This photograph is © 2001-2019 by Murray Lundberg, and is not to be copied without express permission.