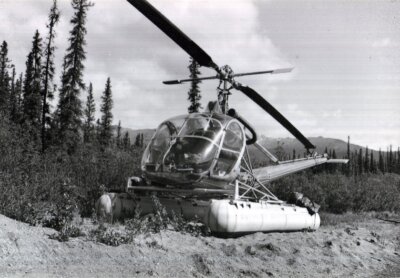 Helicopters undoubtedly changed the face of the modern world, and Yukon Territory is no exception. The Hiller 360 saw success as an early helicopter in both military and civilian roles, particularly in the survey role. The earliest helicopters in the territory were Hiller 360s operating under Kenting Aviation in part of Topographical Survey of Canada, in the northern part of Yukon. These little helicopters operated in the Yukon from 1949 until 1952.

Although helicopters were very new Kenting Aviation of Toronto, Ontario bought into the idea of them early on. A pair of Hiller 360s owned and operated by Kenting Aviation would serve the northern part of the Yukon every summer from 1949 until 1952. These small helicopters were used to deposit geologists in order to better understand the landscape and potential mineral assets in the area. The 360s were aided in their surveys with the help of fixed wing aircraft like the De Havilland Beaver.

In August 1952, almost immediately after taking off, one of the Hiller helicopters´ engine failed. It is suspected that it was a fuel pump failure that caused the aircraft to lose power. The 360 fell back to earth where its inflatable pontoons snagged on the rocky landscape causing the little helicopter to tip and wreck against the landscape. Miraculously the crew walked away completely unhurt with not even so much as a scratch. The two men wrote OK in the rocks near the crash and were retrieved shortly after the crash.

The crashed Hiller 360 sat exposed in Yukon for more than 40 years before it was restored. Interestingly the tail section of the helicopter was found 160 km away from the original crash site. It is unknown how or why it ended up so far away from the original crash. The wreckage was airlifted out in 2014 so the restoration could begin. The Hiller 360 now sits in the hanger of the Yukon Transportation Muesum, just as mustard yellow as the day she crashed.

The Hiller 360s were an important early step in Yukon helicopters. However, like the original aircraft that christened Yukon skies in 1920, they were foreigners. The Hiller 360 did prove the feasibility of helicopters in the Yukon though. Local companies began using helis soon after the Hillers and their survey. Companies such as Klondike Helicopters and Yukon Airways, bought into the Hiller 360´s successor, the Hiller 12E. The 12E looked outwardly near identical to the 360 but had a more powerful engine and had a larger lift capacity. Despite the Hiller 360´s short span here in the Yukon, they proved the invaluable asset that is the helicopter in the territory.
–
–
–
–
The Yukon Transportation Museum does not own these images and are only using them to illustrate the history of these aircraft.
– 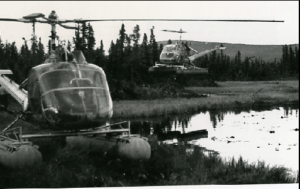 One of two Hiller 360 helicopters comes into land at camp somewhere in northern Yukon. Date 1951. 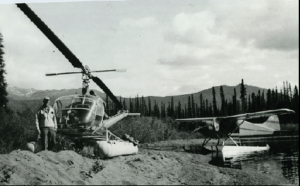 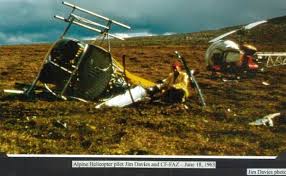 Jim Davies with the crashed Hiller 360 in 1963. Jim had written his name on the wreck and was asked if he had taken any photos of when he was there. He had.
Crash site outside of Old Crow Yukon. Date 1963.