Paul Cyr loved cats. In the evening he always had a favorite purring in his lap. His working hours were most often spent on the seat of a cat. No matter the color or the brand, if it had tracks and levers, Paul could make it do his bidding.

Paul Cyr was Whitehorse born in 1923. His father and uncle had come into the country over the Chilkoot in ’98; his mother came 20 years later from Montreal. The family business centered on the cutting and selling of wood, plus hauling water in and refuse out. When Paul was 15 his older brother, Wilbrod, bought a small cat to pull the wood sleighs. Brod wired wooden blocks onto the pedals so that Paul could reach them. In a firm hand, Paul wrote ‘Cat Driver’ under his picture and the die was cast.

The Paul Cyr Collection, now housed at the Transportation Museum, contains over 500 slides taken during the 30 years between Jan 1959 and October 1988 when he was The Heavy-Duty Operator for the White Pass & Yukon Route based in Skagway. Paul was never quite so happy as the years when he spent as a ‘Cat Driver’. 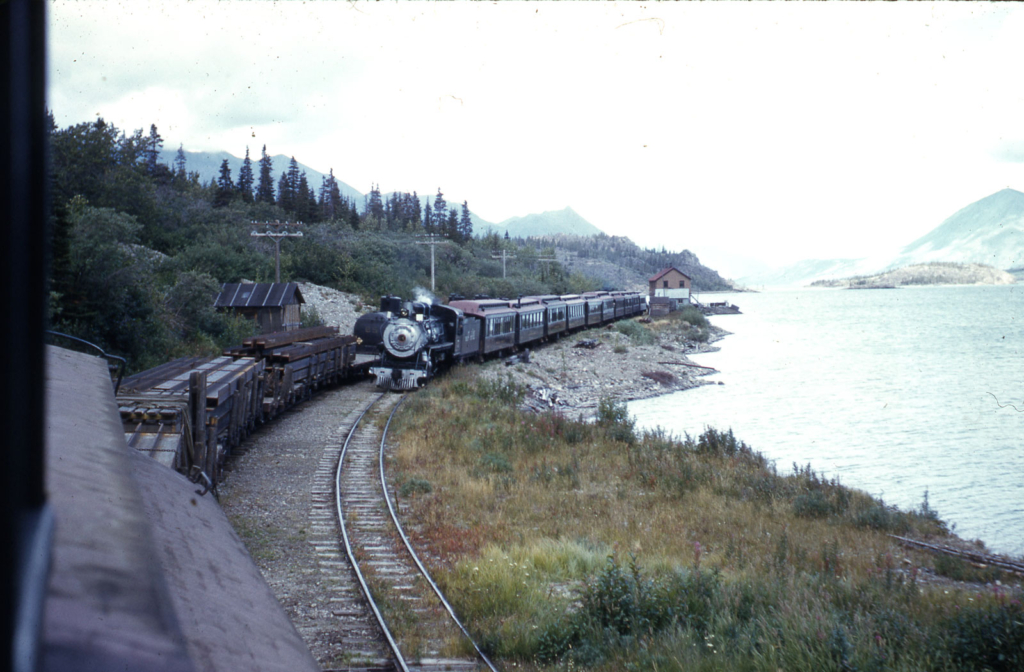 Built with men, horses and black powder between 1898 and 1900, White Pass & Yukon Route rises from sea level at Skagway to the 2865 foot summit of White Pass in just 20 miles, with three switchbacks and only one tunnel. The average gradient was 2.6%—a rise of 141 feet per mile. From the summit the first steel rails in the north continued for another 90 miles through the rolling hills off Yukon’s boreal plateau. The steam engines were coal fired until 1951-52 when all were converted to oil. 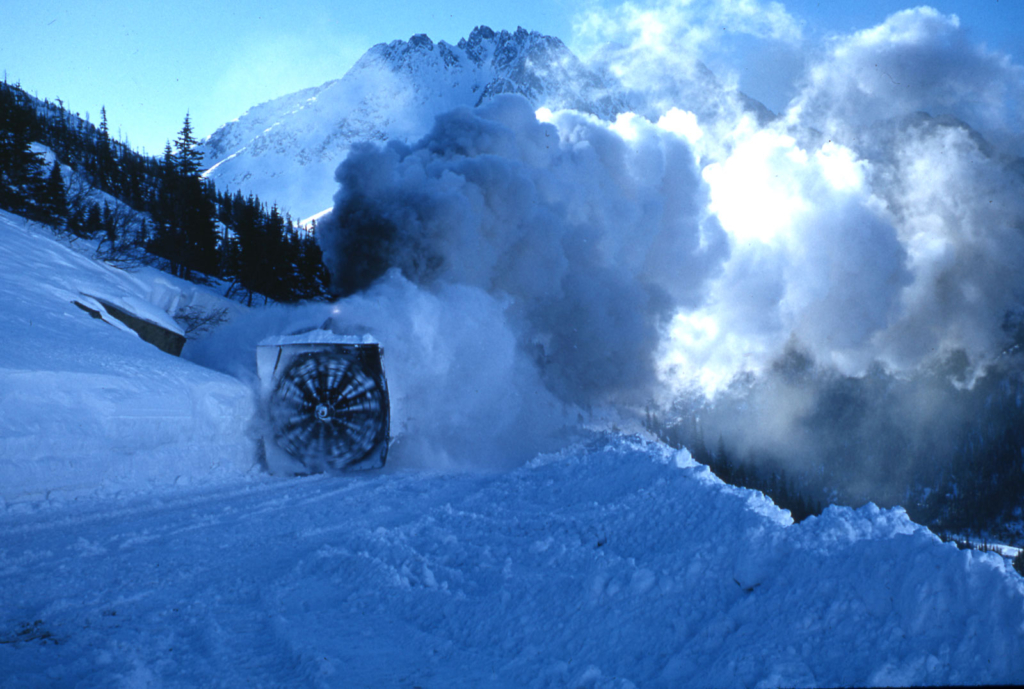 A rotary snowplow required two pusher engines and a full crew of ten men—a pilot, engineer, fireman in the rotary, an engineer and fireman in each pusher engines, plus a conductor and front & rear brakeman. The pilot directed the entire rotary operation. The main whistle – signaled the two pusher engineers to go ahead or to pull back or to high ball it. The pilot used a peep whistle to communicate with the rotary’s engineer. One toot – “Shut the wheel off.” Two toots – “Speed the wheel up.” Two toots quickly followed by two more toots meant “Give ‘er Hell” 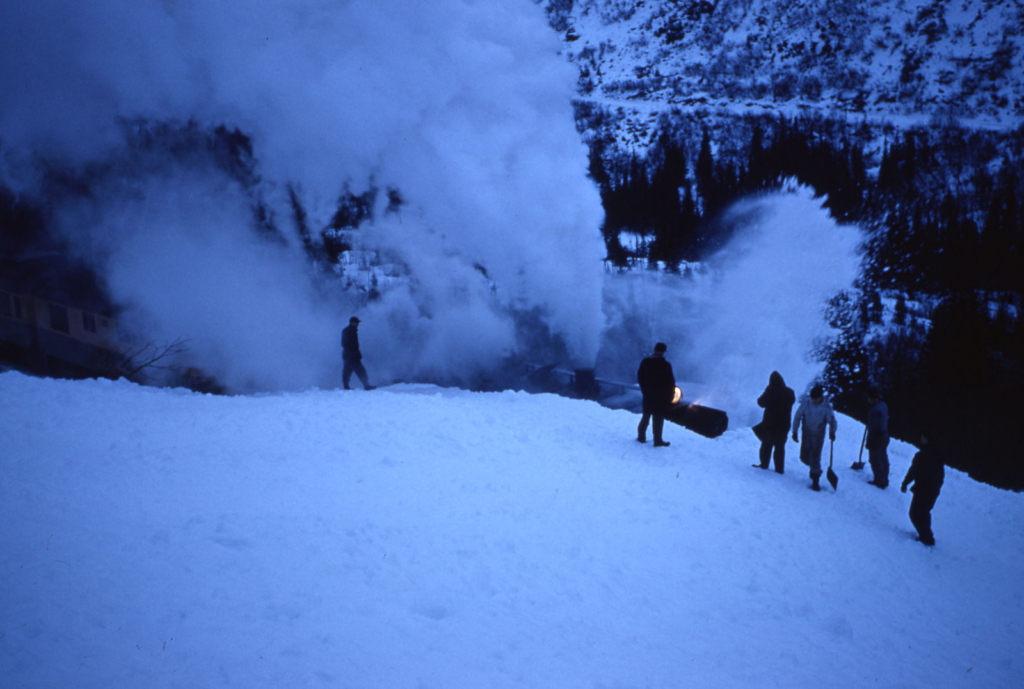 The powerful rotaries threw the snow out the top. If the drifts or slides were higher
than the rotary, then snow must be shoveled down to 12 feet before the rotary could proceed. That took some time and a lot of muscle. 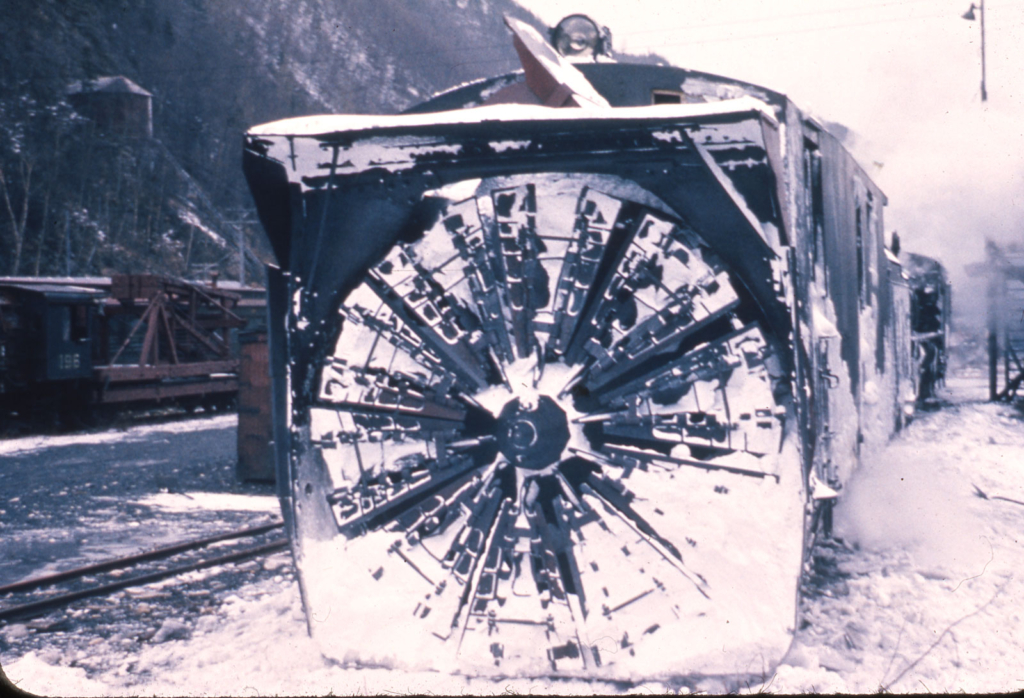 A rotary is nothing more than a steam engine enclosed in a cab. Power from the steam engine is transmitted to a quartershaft which comes in from both sides with gears which turn the 10 or 12 inch shaft. The bullwheel is attached to the shaft out on the front end under the hood. The wheel has cutting blades. The rotary does not move by itself and required two steam pusher engines. There were often large rocks in avalanches, generally called slides by the railroad men, that could break blades in the bull wheel. Crew men had to get the rocks out by shoveling around them, prying them out or pulling them with a chain fastened to the rotary hood. The bullwheel could also freeze and was always kept turning slowly and the massive wheel was rimmed with steam jets under the hood. 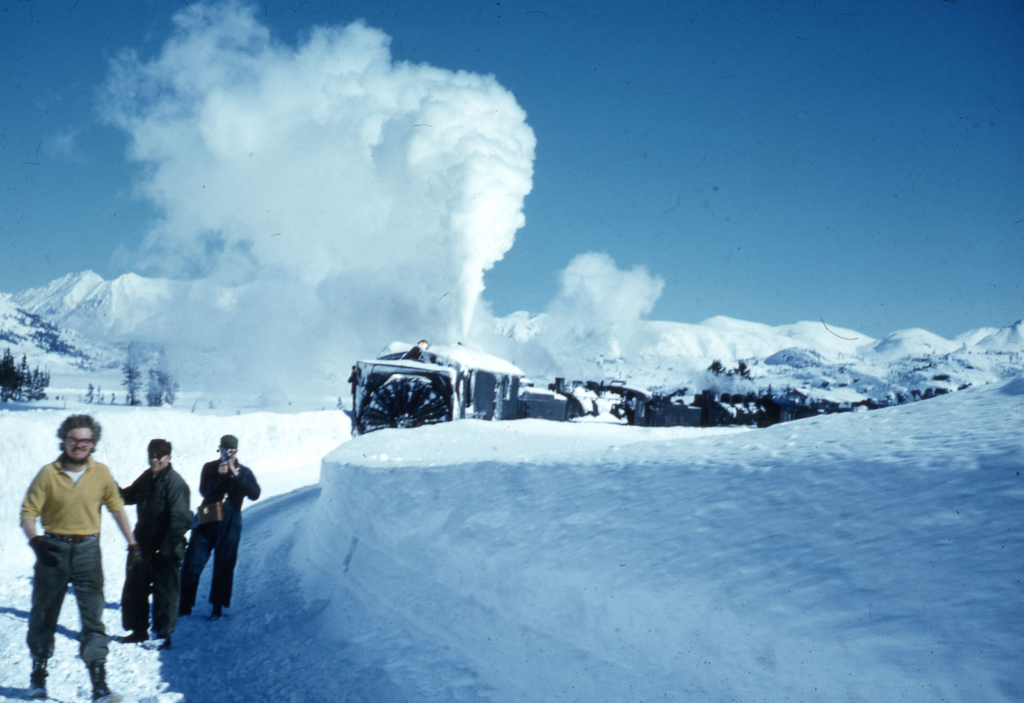 In 1899 White Pass ordered two steam rotaries from Cooke Locomotive Works in Patterson, New Jersey. These two would continue to work faithfully until 1962. One serious concern for the rotary fleet and its three steam engines was maintaining the water supply. To address this water tanks were placed at every section, and the rotaries and pusher engines could share water if necessary. 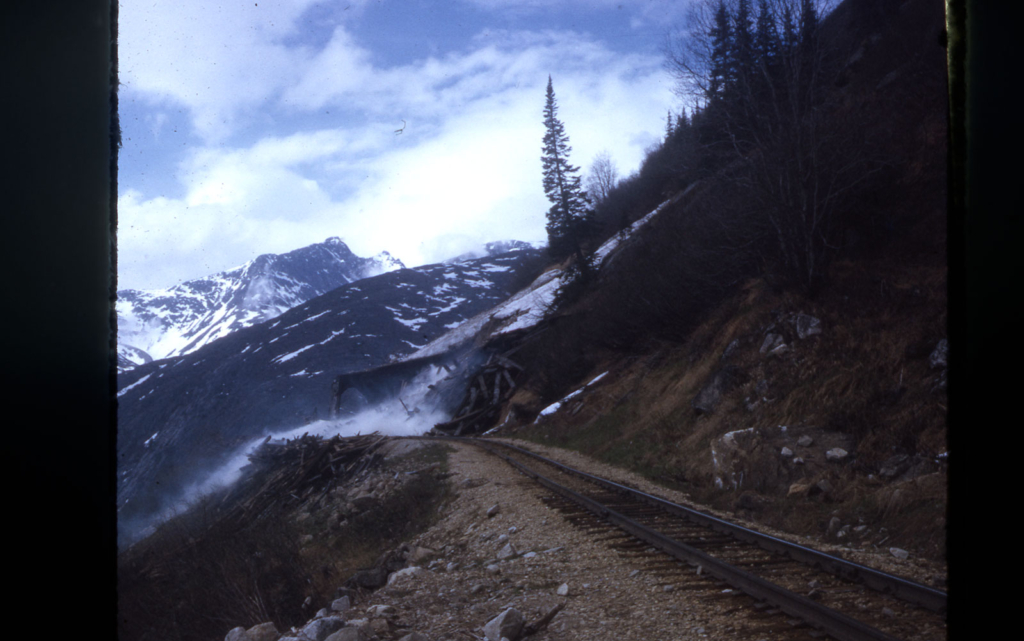 There were two snow sheds on The Hill. Fifteen-mile snow shed and Hannan shed at 17.1 mile. The sheds were strategically placed where snow continually sifted down from the steep hill about the tracks. There were three more in the narrow cuts at the summit — The American shed at 19.2, Boundary Shed at 20.5 straddled the border between Alaska and British Columbia, and The Canadian Shed at 21 mile post. 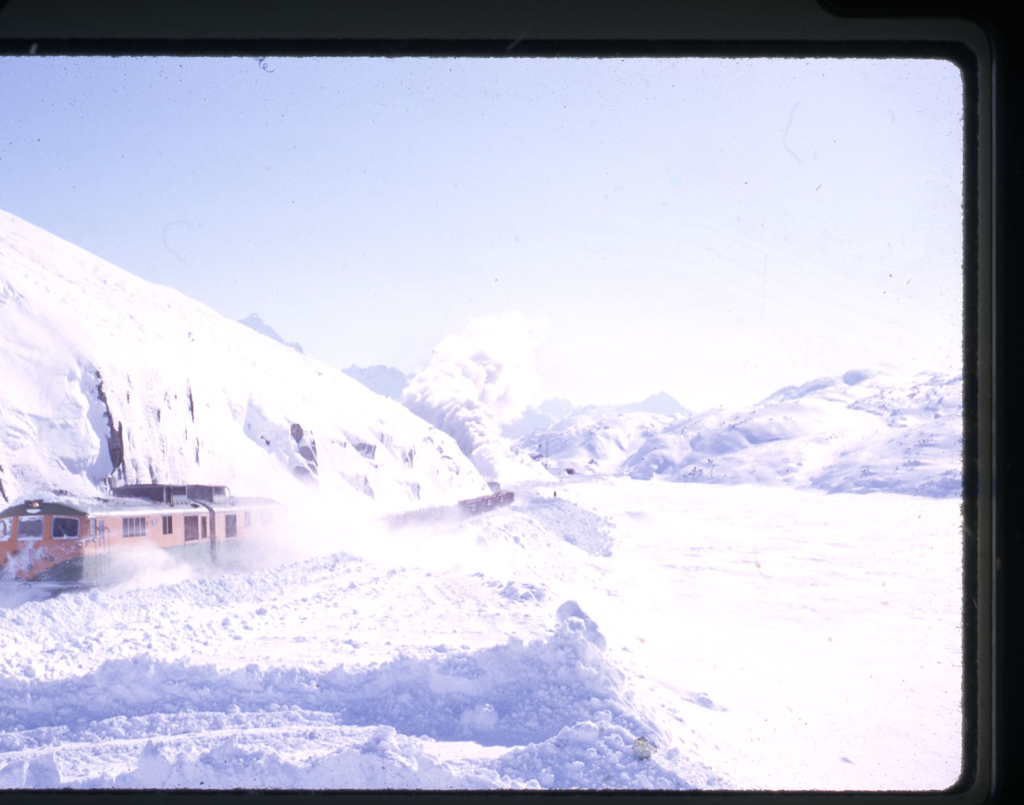 In 1954 White Pass acquired their first two General Electric diesels and sometimes ran mixed trains until the steam engines were phased out in 1962. Here a 90-class is in the lead pulling a load of steel with a steam in the middle of the train acting as a helper. Each of the eventual eight General Electric weighed between 81 and 83 tons and were numbered from 91 to 98 — the “90-class” engines. 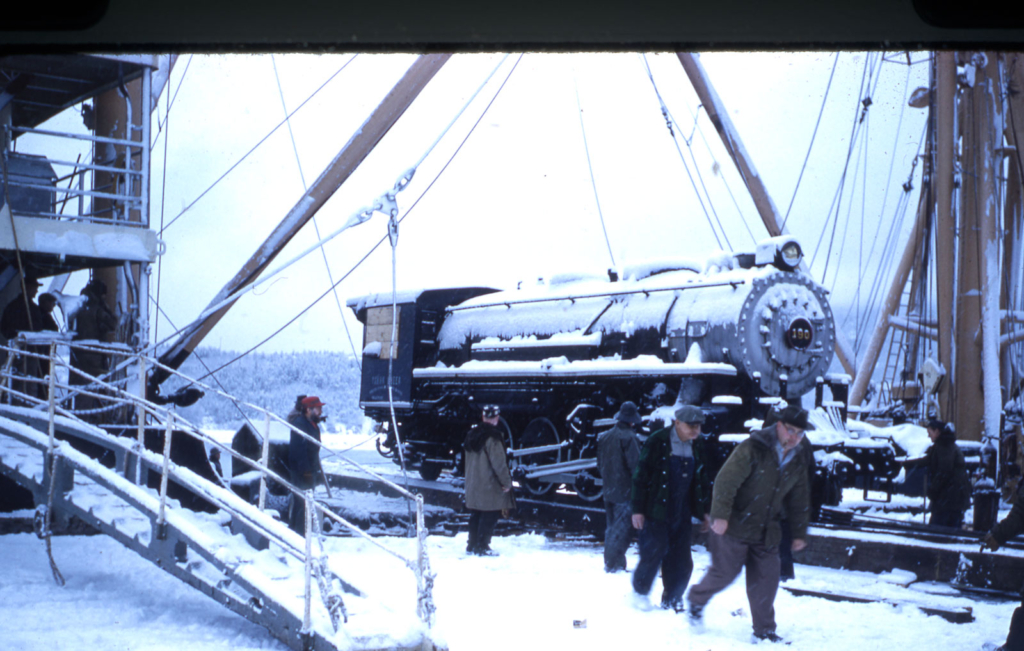 The only remaining rotary has been fully restored and is sometimes brought out for a ceremonial clearing in springtime. The beloved steam engines with their melodious whistles were shipped out to other historic narrow gauge railroads. The old engineers mourned their passing, but not the great effort and grime that they demanded.

Only Steam engine number 73 is left—the last of two Baldwin 2-8-2 purchased new in 1947. The US Army commandeered the White Pass trains ran around the clock carrying men and supplies from tidewater at Skagway to Whitehorse for construction of the ALCAN highway. By the time the war was over and the highway finished all of the railroad equipment was either broken or just plain worn out. 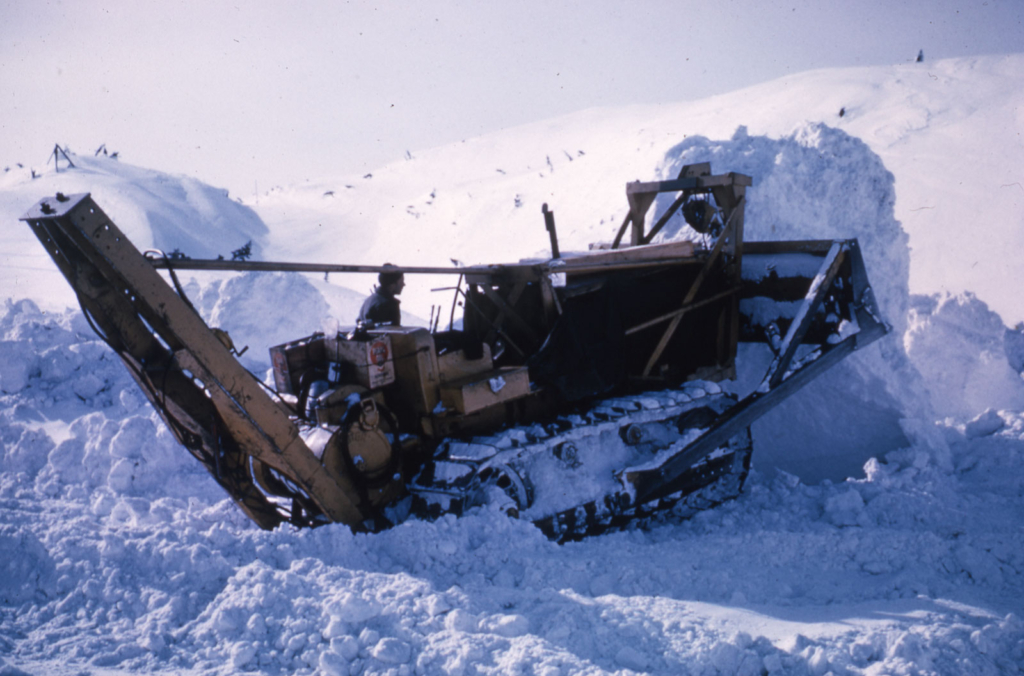 A horrific three-day blizzard closed the railroad in January 1962. Both rotaries were stuck at the summit and the southbound train coming from Whitehorse with the basketball team had to go back to Bennett. Paul Cyr had the D-8 cat positioned just north of 14-1 bridge near Glacier. The cats had never been allowed on the high bridges; they had always been moved with a lowboy behind a train. In desperation Superintendent of Rail, Marvin Taylor, who was at the summit, called Paul on the admin line at Glacier Section and asked if he thought he could make it to the summit with the D-8. Paul and his flagman, an Inuit man named Lloyd Takak, started out. The D-8 had no cab and the lights weren’t working. Paul had to clear drifts and slides all the way up the hill in a howling blizzard. When they reached 18-A bridge visibility was nil. Takak rode on the blade with a flashlight and signaled to Paul whether to move right or left. Paul always claimed when they reached the summit at 2am that Taylor kissed him. Probably not, but it was a new day for White Pass. Once the company learned that the cats could indeed cross the high bridges they began to make plans to retire the rotary fleet — source of much overtime for the trainmen and endless hours of repair for the shops. Most of the fellows called Paul ‘The Frenchmen’. The trainmen, seeing the writing on the wall, called him ‘The Boogeyman’. 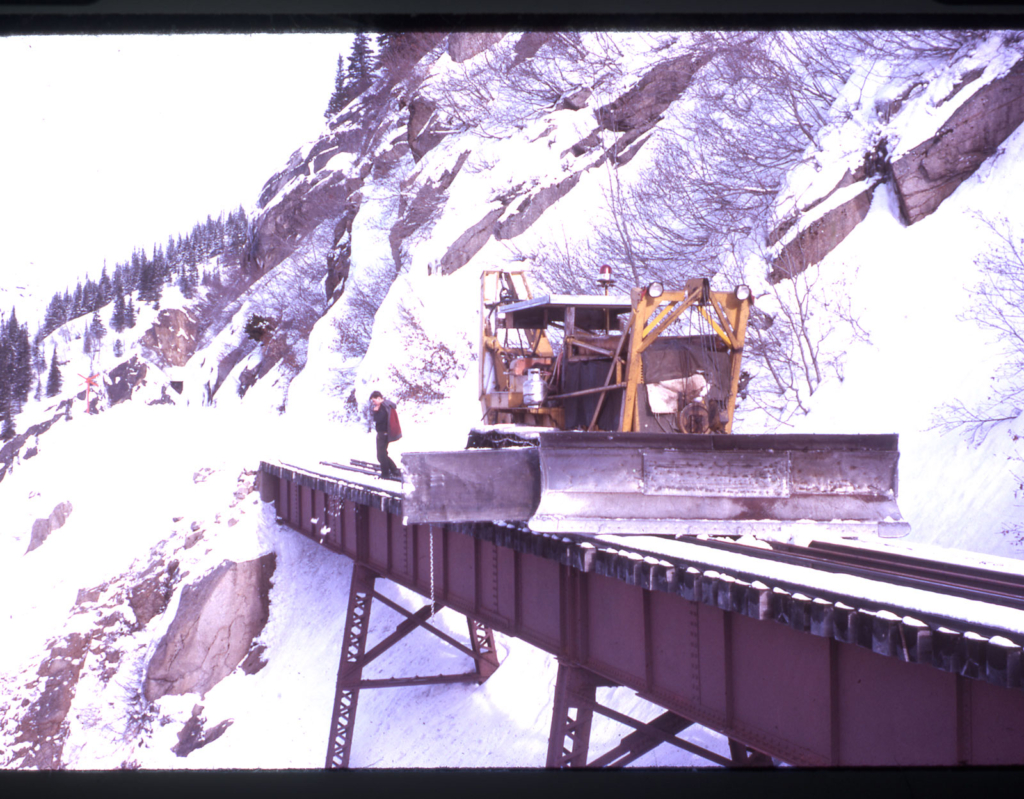 The Skagway shops devised a wing for the blade of the old D 8 shown here on 15-A bridge. The wing was removable and could be bolted in place on either end of the blade, but always on the canyon side. The wing greatly increasing the width the cat could plow on The Hill. 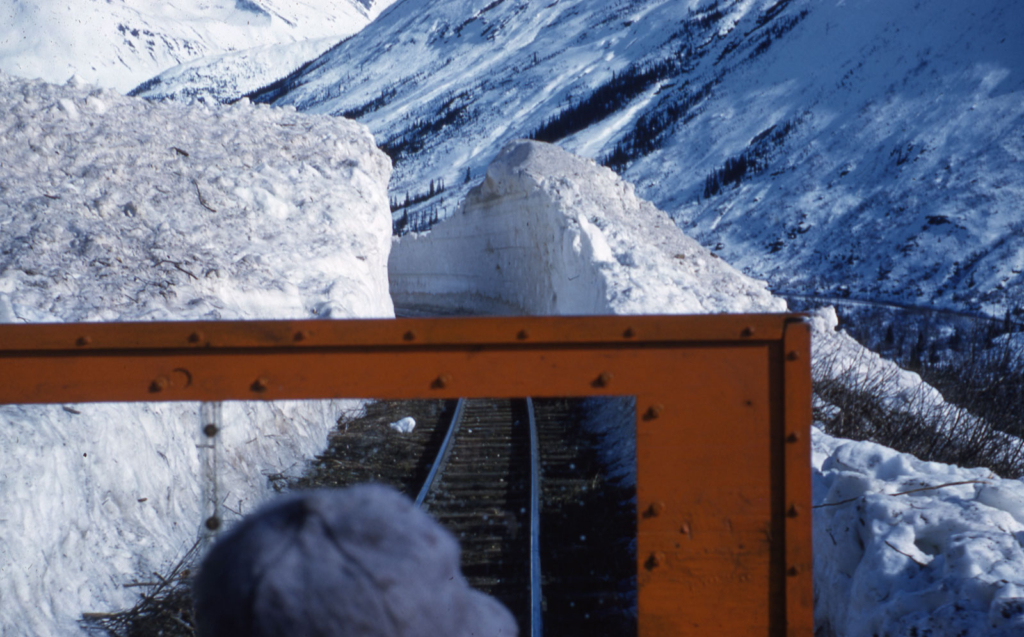 A newer D-7 working southbound on The Hill. The roadbed runs totally exposed across the mountain face from Glacier at 14 mile to Inspiration Point at 17 mile post. 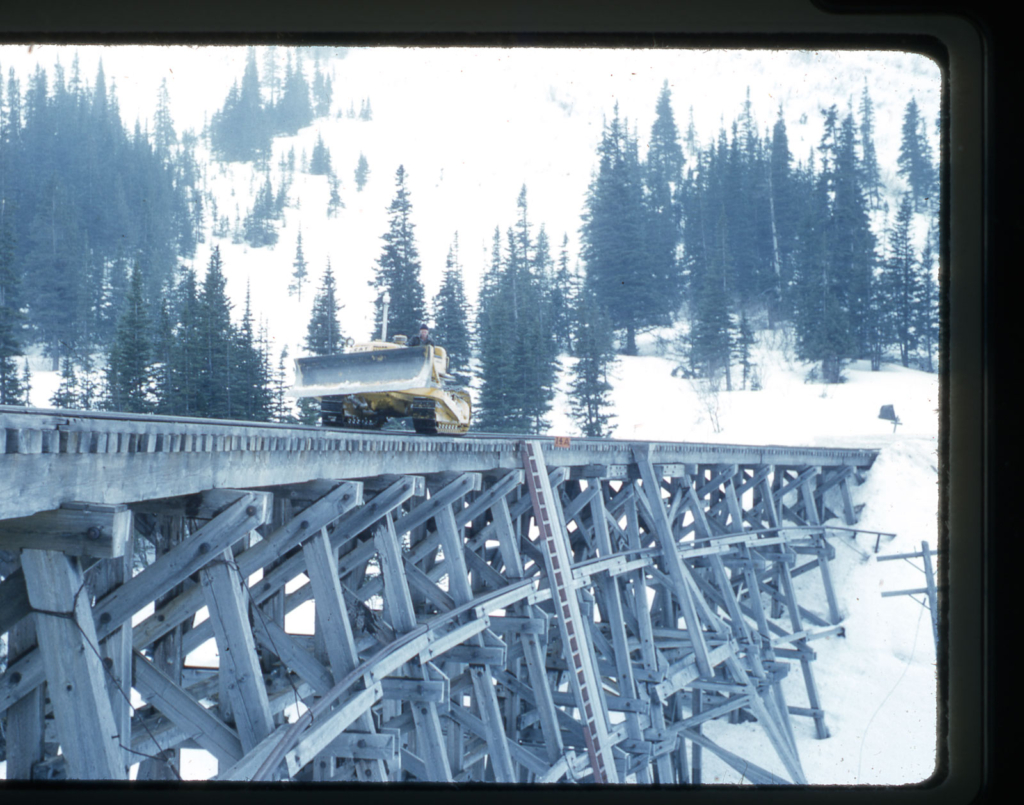 This is the D-7 and not the big D-8, but gives an idea of what running across a bridge 215’ above Dead Horse Canyon was like. The tracks of the D-8 hung over 18” on each side at the north approach to 18-A. Paul’s initiation for a green flagman was to stop on the overhang, adjust all his zippers, smooth his hair, and then put the cat in high gear and start off. 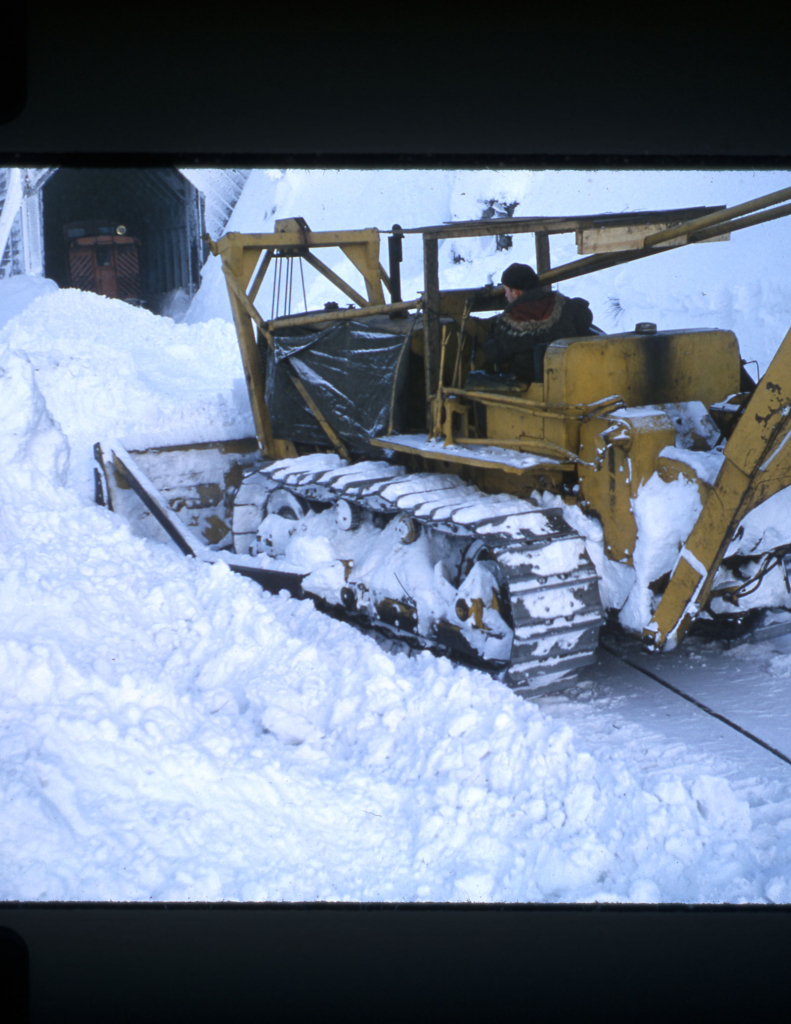 Before the age of radios, when Paul and his flagman needed to report their position so that the dispatcher could send the train up or down The Hill, they climbed on top of the cat and clipped into the administration line with a hand held phone. Only after radios and the advent of snow machines was Paul able to come home on some fair weather weekends. Otherwise, he spent six weeks at a time either at Glacier or at White Pass section at the summit. 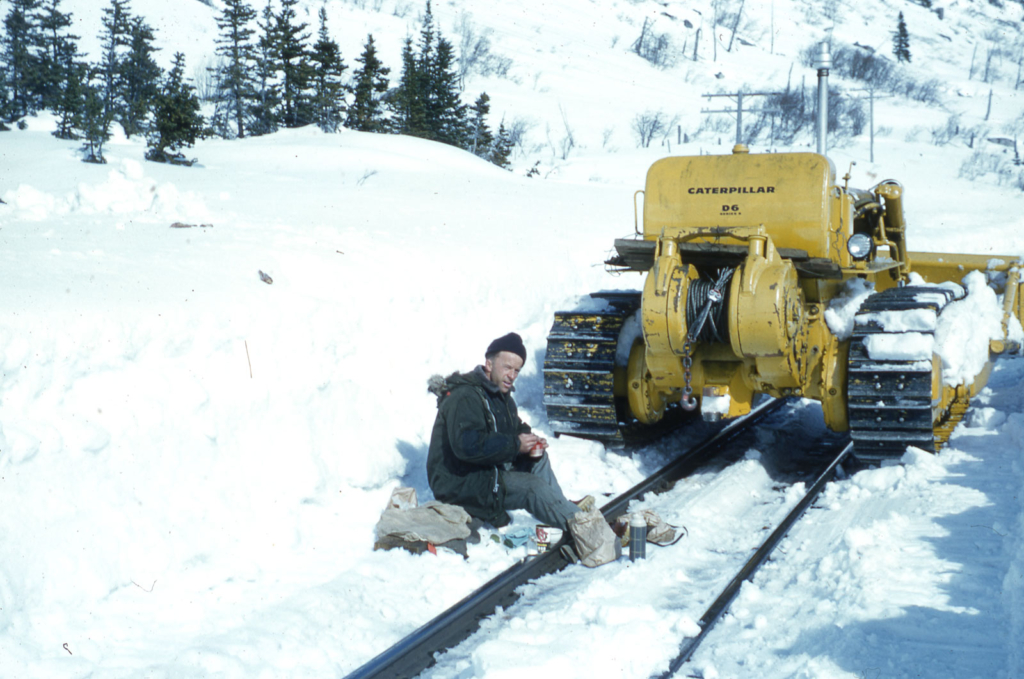 The catskinner and his flagman would be away from the section house all day in winter and lunch was a picnic. They thawed their frozen sandwiches on the hot manifold and often heated cans of chili or stew. 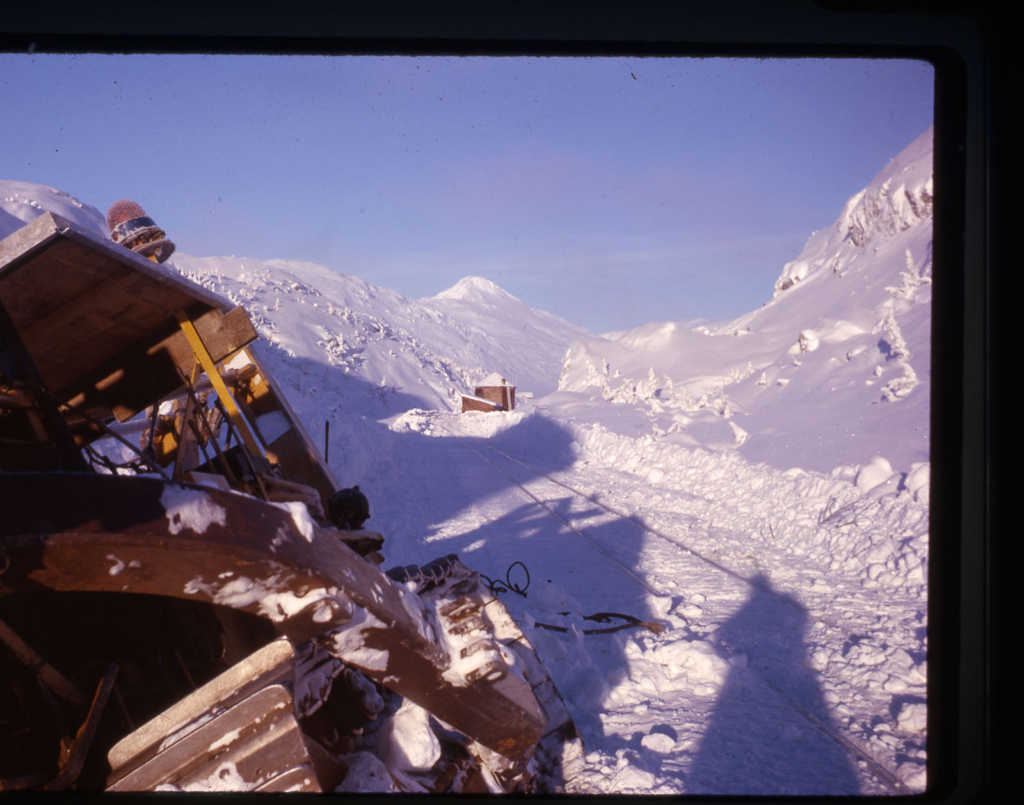 At the summit there are natural springs that run year round. Covered with a deep layer of insulating snow in winter, the water does not freeze and creates a trap for an unwary cat. Once Paul was stuck in just such a trap and after a long and futile struggle he flagged down the southbound train when it came by and the engineer, JD True, pulled him out. 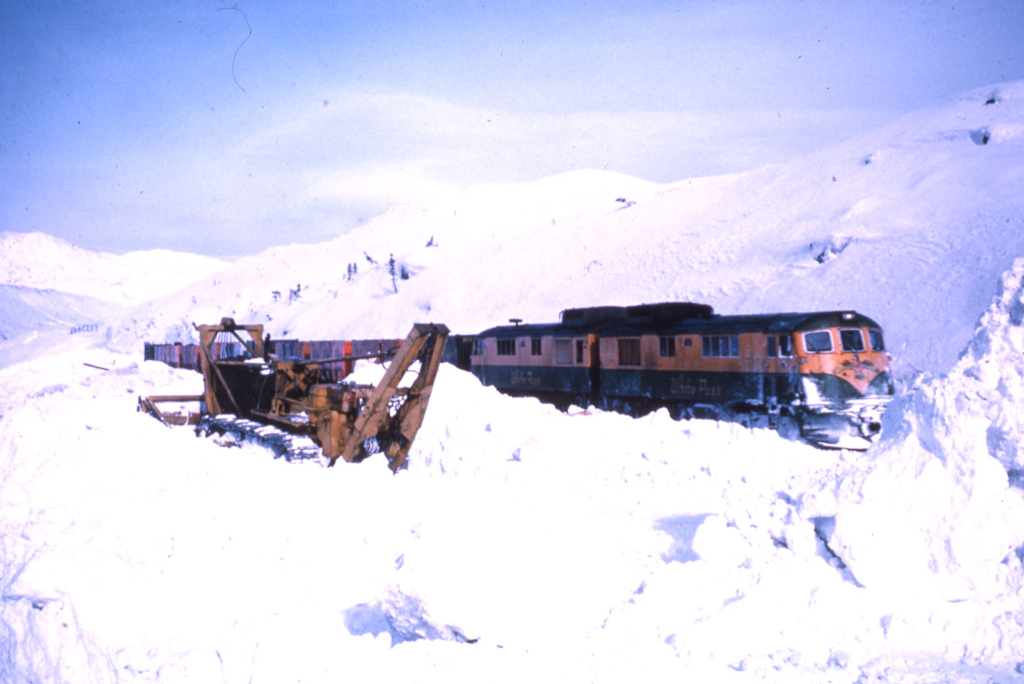 For the whole rest of the winter, whenever JD True’s train passed where Paul was pulled off to clear the train, he gleefully dangled a chain out the window of the diesel. 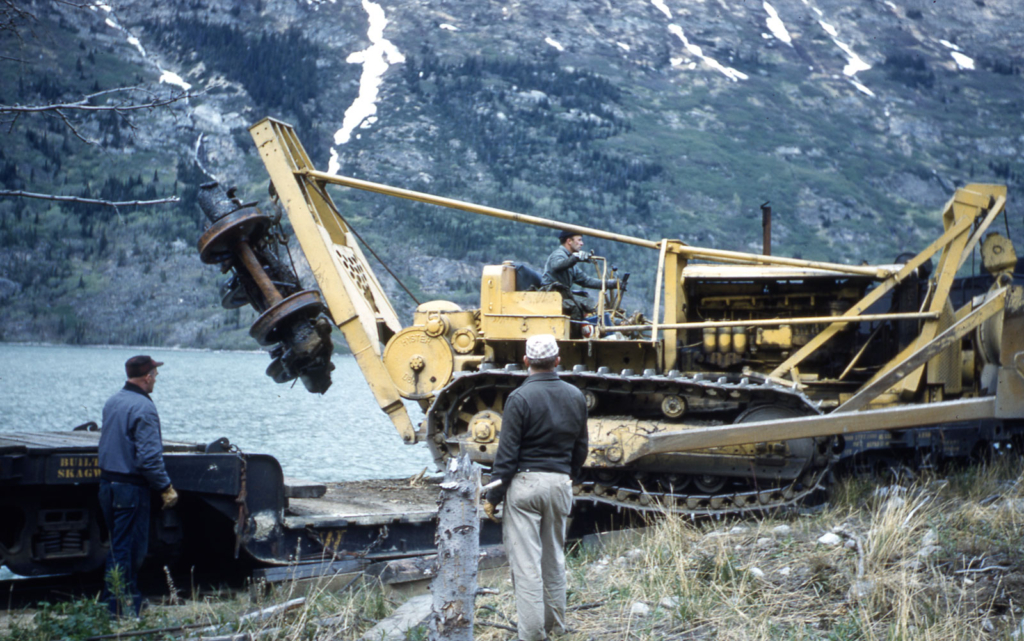 The big, old, clanking, scarred-up D-8 was the mainstay of White Pass equipment until the late 62 when the rotaries were phased out and 2 more cats were needed. Three cats, each with an operator and flagman, replaced the two Cooke rotaries that required a total of 20 crewmen.

All summer long Paul and his faithful D-8 tended to maintenance chores such as fishing the trucks from a tanker car mishap out of Lake Bennett. 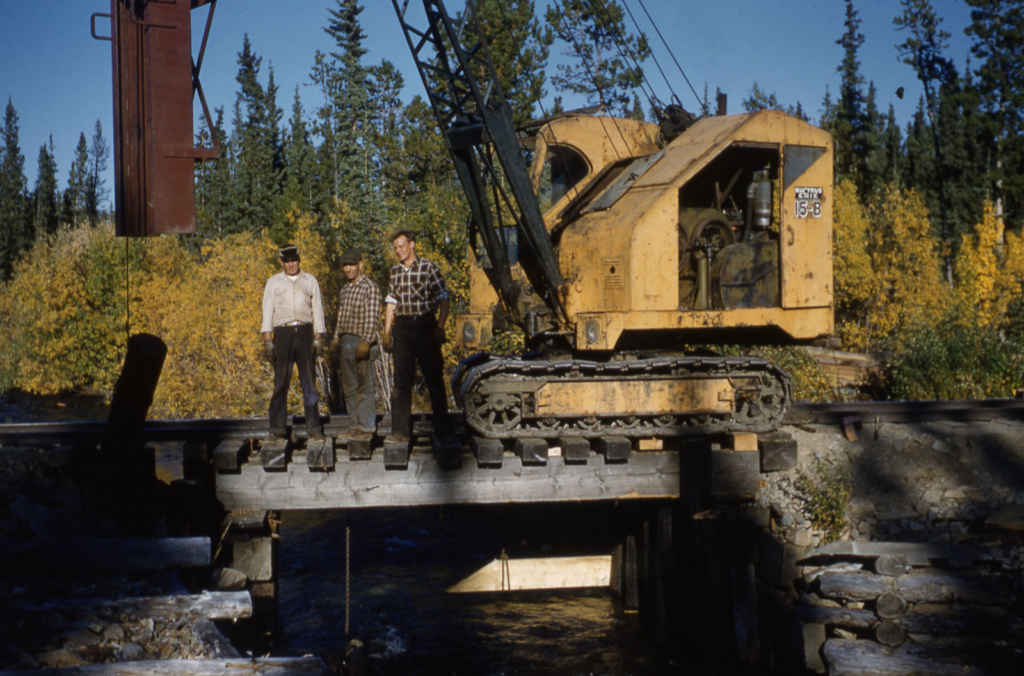 The American Army had a surplus yard at Whitehorse in 1961. That’s where they sent Paul to have a look when they needed a crane for a job driving piling for a bridge at Cowley and—woe is us—the only crane the company had was down at Skagway. Paul took a can of gas and a battery with him and, when he installed the battery and poured in the gas, the crane ran as good as new. 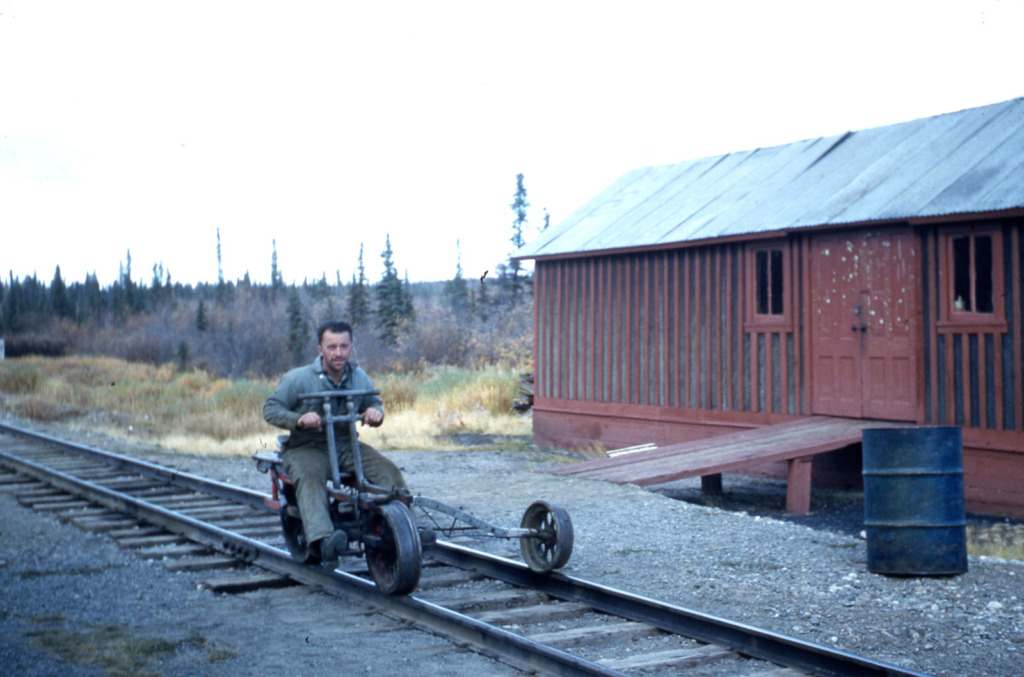 A narrow gauge railway is something of an anachronism in the 21st century and this WP&YR velocipede certainly is that. It was a handy tool, required only vigorous pumping with hands and feet, and could be easily set off into a siding. Paul used it to travel from his work area near Cowley to the section house where the section foreman’s wife treated him to the luxury of a home cooked lunch.

White Pass was generous in loaning its equipment for both community and private endeavors, but the company always required that Paul be the one to operate it. He worked for free for the churches, thinking it somehow counted. For small jobs the fee was a case of beer. Bigger jobs required some green stuff.

Paul died in 2013 at age 90. He was able to work until he took a bad fall in 2010. By the time the end came he only knew Alice and daughter Tina, but there is no doubt that if someone had hoisted him onto that old war-surplus D-8 he loved so much that he would have put it in high gear and roared off.