Queen of the Yukon

Although the original Queen of the Yukon was not the first aircraft to fly over the Yukon, it was the first to be registered and serve in the territory. The Queen of the Yukon was a stock version of the Ryan B-1 Brougham, and touted as the sister ship of the Spirit of St. Louis, Charles Lindbergh’s heavily-modified Ryan that performed the first solo nonstop transatlantic flight. Air travel was so new at this time that there were no forms to register aircraft in the Yukon. For this reason, the Queen was registered as a steamboat! Although more expensive to travel by air than river, dogsled, or sledge, this new mode of transportation opened up the Yukon in a whole new way.

For the first time, Yukoners could have their mail delivered through the air. Travel between communities could be shortened to several hours from days or weeks. As there were no roads between communities in the territory at this time, this allowed a much more steady flow of information and correspondence, especially in the winter when the river had frozen over. It was intended to serve a long and profitable career hauling mail and passengers throughout the Yukon. Unfortunately, eight months after her inaugural flight, the Queen of the Yukon crashed into the truck of the company’s agent and was damaged beyond repair. 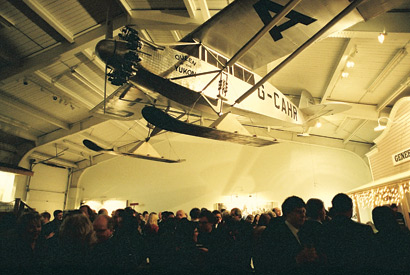 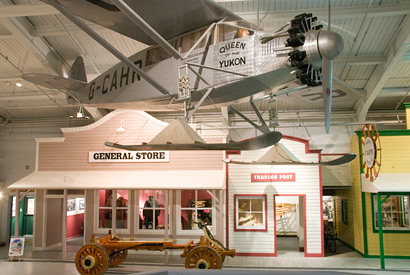 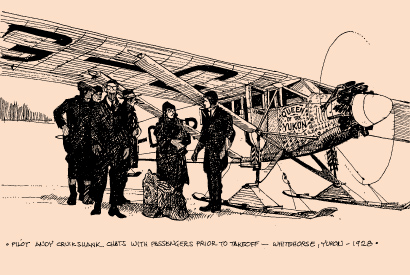 The delivery of the Queen of the Yukon II on August 17, 1929 brought new hope to Yukon Airways. During the barnstorming trip north, this airplane excited crowds wherever it went. A lot of these people went for short flights with John Patterson, the pilot, probably seeing their towns and homes from high above for the first time. For a time, the Queen of the Yukon II served faithfully, delivering mail and passengers all throughout the territory. Unfortunately, tragedy struck on November 2, 1929 when pilot John Patterson was taking off at Mayo and the engine failed. The Queen went down and Patterson was killed—the Yukon’s first aviation fatality. The engine was recovered and a third Queen was ordered, but despite their best efforts, Yukon Airways could not recover and by 1930, the company was all but finished. The other employees went on to other ventures in the territory, knowing that despite their sorrow they had accomplished something fantastic. Some mail was still sent via air mail envelopes, but for a time there were no airplanes serving in the Yukon. Today, the remains of the Queen of the Yukon rest underneath the runway at the Whitehorse International Airport.

The replica Queen of the Yukon on display at the museum was commissioned by the Yukon Government for the Yukon pavilion at Expo ’86 in Vancouver. It was built by world-renowned harpsichord builder Ted Turner and his team of assistants on Pender Island, B.C. She is made almost entirely of wood with a welded steel frame and fabric covering. The replica took nine months to complete. After its debut at Expo, this Queen of the Yukon was donated to the Yukon Transportation Museum.